Latest News and Local Views on the Project 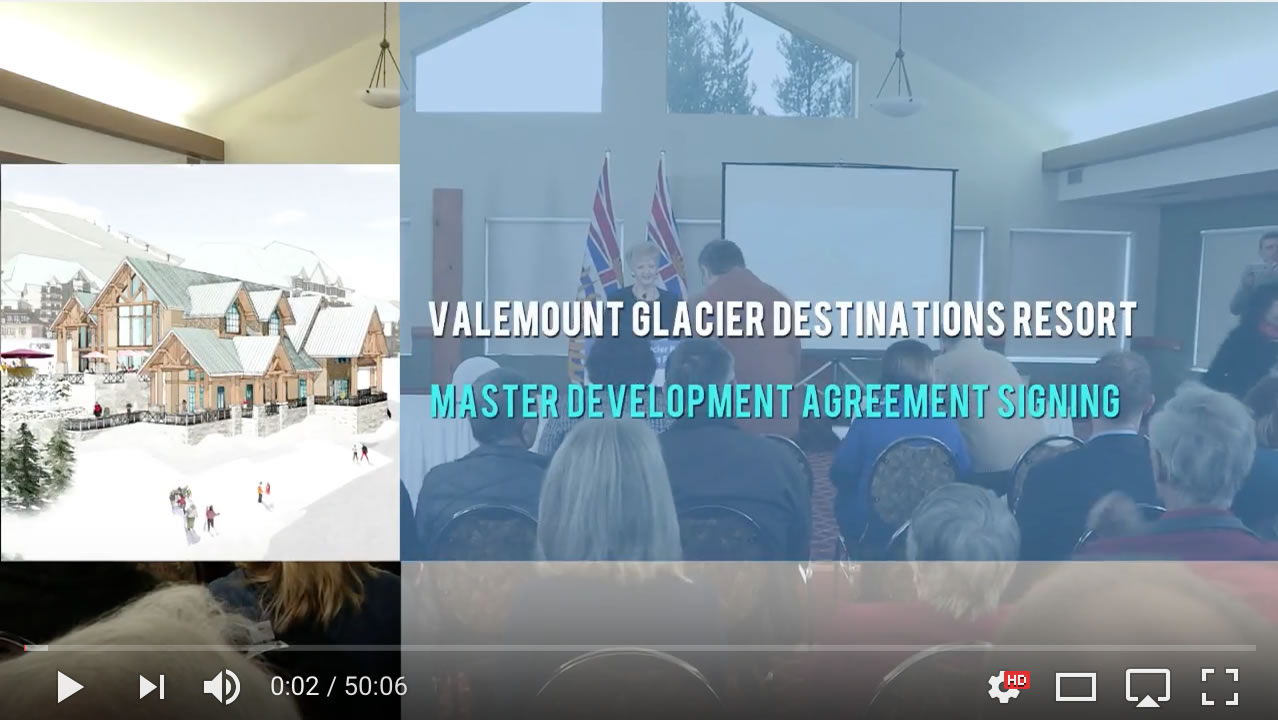 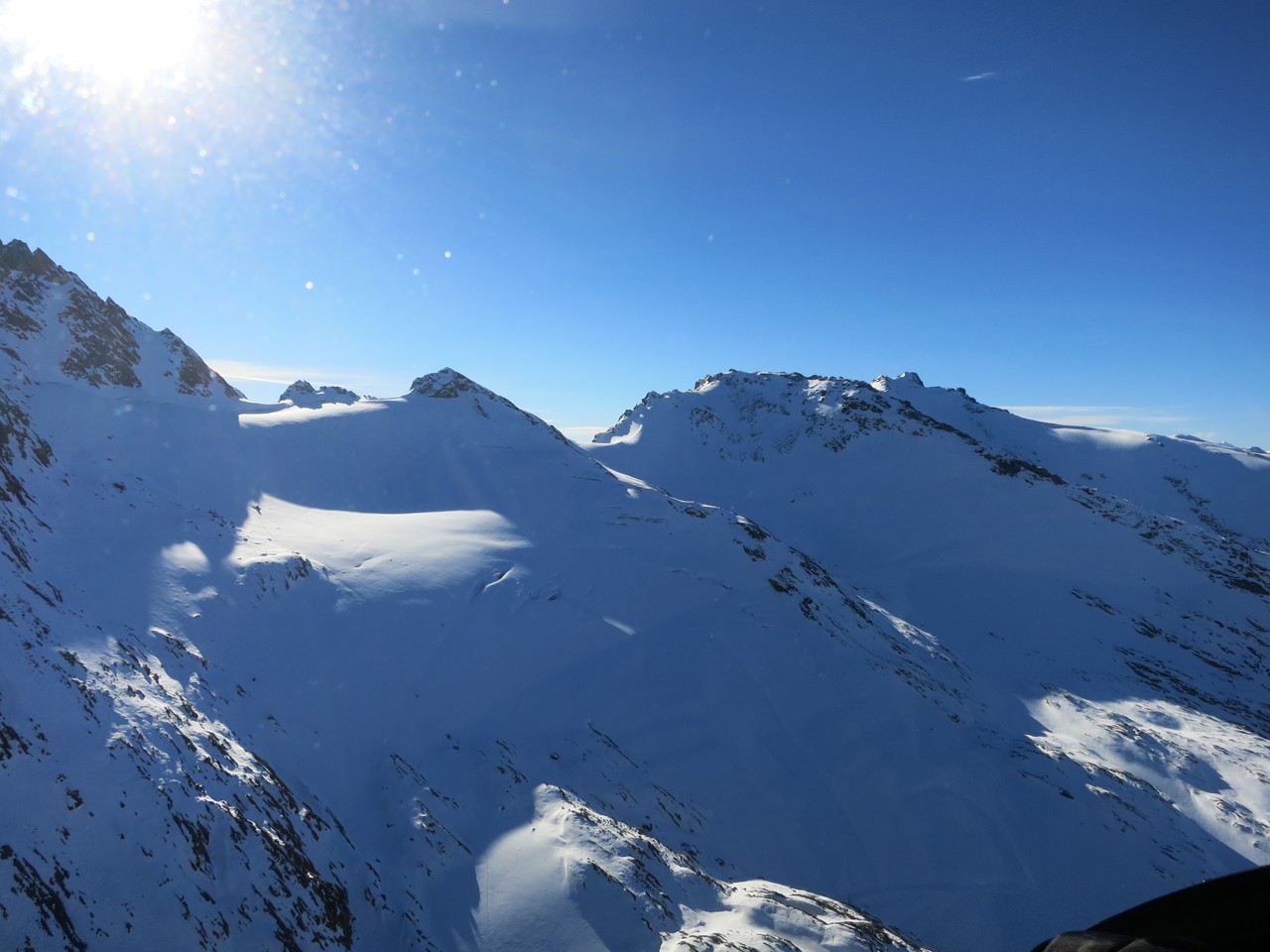 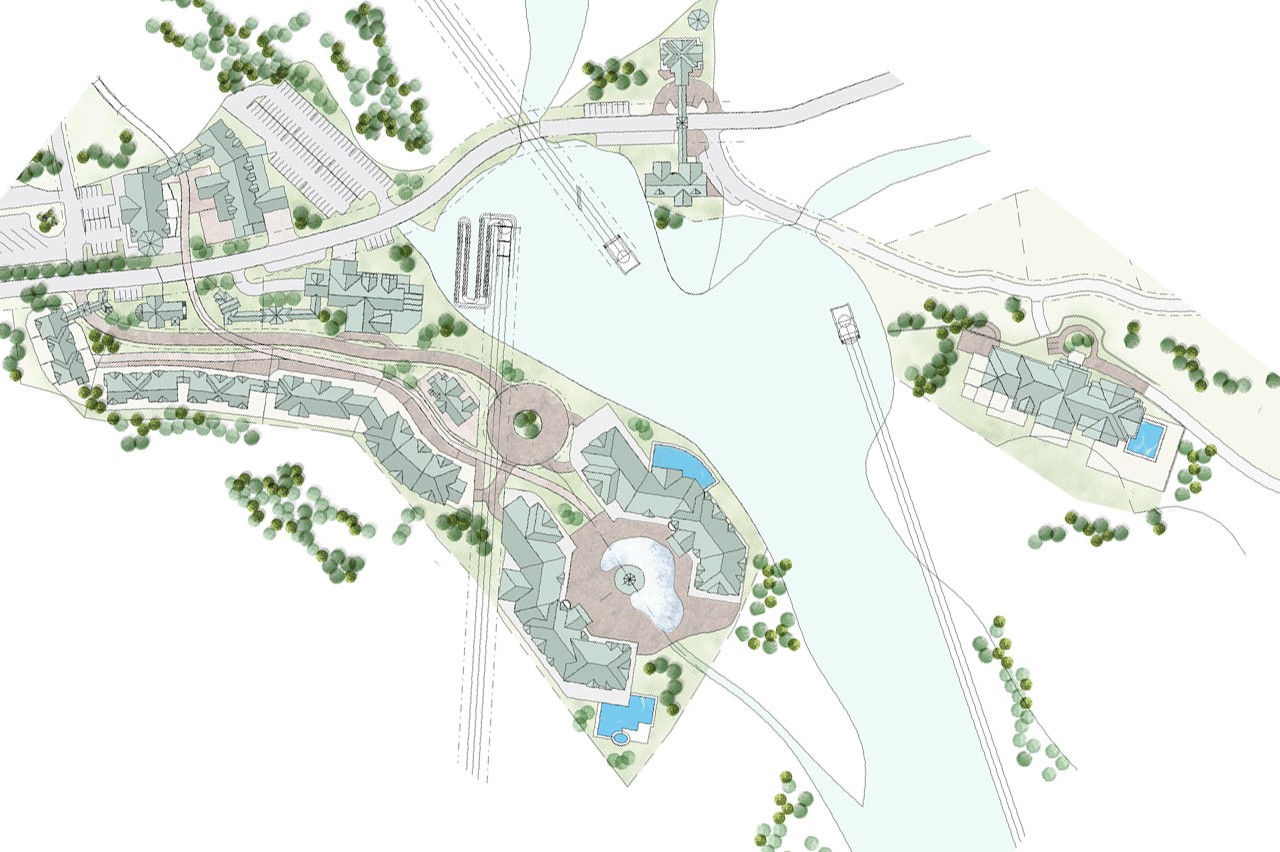 The Valemount Glacier Destinations project continues to progress through the Provincial and local government approval processes. On Thursday, September 15, 2016 the project received rezoning approval from the Regional District of Fraser-Fort George. The Regional District Directors voted unanimously to adopt a new zoning bylaw for the project, which amends the project area to match the provincially approved Master Plan. The land will also be designated within a Development Permit Area for two purposes: The construction of resort buildings and subdivisions will require Development Permit approval from the Regional District Board, in addition to compliance with the Design Guidelines of the Master Plan. Construction will also require building permits. The project team is presently working towards completing a Master Development Agreement with the Province. The Master Plan can be downloaded here.
News / August 17, 2016 VANCOUVER – Valemount Glacier Destinations Ltd. received its Master Plan approval today from the British Columbia government. According to Tommaso Oberti of Oberti Resort Design and the Pheidias Group, “Valemount Glacier Destinations will feature some of the most impressive viewpoints for sightseeing in North America. It also opens lift access to one of the best snow zones and reliable climates for snowsports on the continent.” A modern lift system designed for both sightseers and skiers will bring visitors to the summits of Mount Pierre Elliot Trudeau, Twilight Glacier, Glacier Ridge and Mount Arthur Meighen. “It will be a true multi-peak experience surrounded by stunning glaciers,” continues Oberti. “The project embodies the best of B.C. – environmentally sustainable design coupled with some of the best vistas and mountain experiences in the world.” The Master Plan envisions a new, iconic mountain sightseeing and sporting destination in Canada. At build-out, it will provide sustainable public access to large glaciers at over 3,000 meters (9,850 feet) elevation – the only such access in North America – and will have a vertical drop of approximately 2,050 meters (6,726 feet), the largest in North America and third largest in the world. It is expected to become a major sightseeing and year-round skiing destination welcoming visitors from the nearby National Parks and from around the world.  This is one of the rare available sites for new mountain resort developments in North America. The project team thanks Minister Shirley Bond (Prince George – Valemount MLA), and the Mountain Resorts Branch for today’s announcement, which is the culmination of four years of tireless work together with the proponent group. Valemount Glacier Destinations has drawn unprecedented public support over many open houses and public meetings. “It has been inspiring to work with our partners, the local people who will be welcoming visitors to their magnificent land. We thank Valemount mayor Jeanette Townsend and her Council, former mayors Andru McCracken and Bob Smith, McBride mayor Lorrane Martin, the Valemount Ski Society and the people of Valemount and the Robson Valley, whose initiative and enthusiasm have been a major driving force,” says Oberti. The project is located in the Premier Range, within the traditional territory of the Simpcw First Nation, whose support and partnership have been integral to the project since its beginning. “We have appreciated that Chief Nathan Matthew has seen the promise of a significant tourism destination to enhance the prospects of the Simpcw”, says Oberti. Already, the Simpcw people have contributed extensive work through Estsek, their environmental consulting company. The project has undergone a harmonized approval process, with the Regional District of Fraser – Fort George processing an Official Community Plan Amendment and rezoning in concurrence with the Master Plan review process. Local MP Bob Zimmer has also encouraged this project, which will show visitors the extraordinary beauty of northern British Columbia. Oberto Oberti, the project architect and originator of the vision adds, “this project would not be possible without the initiative and steadfast support of the people of Valemount and the Simpcw and it has been carefully designed to integrate with the existing community.” The next steps are the completion of a Master Development Agreement with the province as well as imminent completion of the rezoning and Official Community Plan amendment process with the regional district. Construction is expected to begin in the spring of 2017, with an ultimate public opening in December 2017. The Master Plan can be downloaded from the project website: https://valemountglaciers.com/master-plan/ For further information, please contact Tommaso Oberti: E: toberti@pheidias.ca T: (604) 613-2949
News / April 25, 2016 VANCOUVER – Valemount Glacier Destinations Ltd. (VGD) is pleased to announce that its consultants, the Pheidias Group and Oberti Resort Design have formally submitted the Master Plan for what will be the premier alpine sightseeing and skiing resort in North America and that the Province has accepted it. In an October 19, 2015 letter to the project’s planners, the Province indicated that the Master Plan meets its requirements for acceptance and it will initiate a Master Plan Review Process under the its All Seasons Resort Policy and Guidelines. The Mountain Resorts Branch of the Ministry of Forests, Lands and Natural Resource Operations of the Province of British Columbia will lead the process. A public Open House presenting the Master Plan will be held in Valemount on November 4th, 2015. “We are working diligently to build an unparalleled mountain destination in cooperation with the people of Valemount and the Simpcw First Nation,” said Oberto Oberti, the project’s designer and the President and CEO of VGD, “Our goal is to achieve a Master Development Agreement with the Province by the Spring of 2016.” Construction is expected to begin shortly thereafter. The Master Plan is available for downloading at the project website: https://valemountglaciers.com/master-plan/ The Valemount Glacier Destination project will offer high alpine glacier sightseeing, year-round skiing and the largest vertical drop in North America by a wide margin. It is expected to attract destination visitors from around the world. For more information please contact Tommaso Oberti at toberti@pheidias.ca or (604) 662-8833.
News Views / June 18, 2015

A bright idea and the guy behind it One person has been close to the centre of Valemount Glacier Destinations project from the very beginning.
Read more
Views / April 15, 2015

Valemount: a look at the local economy By Andru McCracken Valemount is a village in eastern British Columbia surrounded by tremendous beauty, but unlike towns similarly endowed and just a hundred kilometers away in the national parks, the village has only pursued tourism in the last 20 years.
Read more
Views / April 15, 2015

The proposal in a nutshell By Andru McCracken One of the most exciting parts of being involved in Valemount Glacier Destination Resorts has been seeing how community stakeholders have initiated and shaped this project.
Read more
News Views / April 13, 2015 We are pleased to introduce Andru McCracken, former mayor of the Village of Valemount, who will be providing stories, backgrounds and insights into the project:
Read more
News / March 18, 2015 Master Plan Submitted to Mountain Resorts Branch Valemount Glacier Destinations Ltd. is pleased to announce that a draft of the Master Plan has been submitted to the Mountain Resorts Branch of the Ministry of Forests, Lands and Natural Resource Operations. An electronic copy and a three-volume printed copy was delivered to the MRB offices in Kamloops, BC today.
Read more